skip to main | skip to sidebar

It’s hard to believe that it was nearly fourteen years ago that I first became aware of Jack Rebney. I did this in the way that most people did, through a fiftieth or hundredth generation VHS compilation of outtakes and between-the-scenes footage that came to be known variously as the Winnebago Man

, Angry RV Salesman, or The Angriest Man in the World.

Like most Winnebago Man virgins before and after me had, I laughed my ass off throughout the first viewing and when it was over, asked immediately to see it again, as if the tape was some amusement park ride I had to experience repeatedly. Instead of the climbs and dips and whipping around sharp corners accompanied by the laughs and howls of the riders, the thrill was in the “fucks,” “shits,” and “sonofabitches” spewed by Jack Rebney on this blurry video recording that ran not much more than five minutes.

, the curse words in the Jack Rebney video had very little to do with the longevity of its cult popularity. For Jack Rebney’s unintentional rant to resonate and bear repeated viewings, whether on the countless well-worn VHS tapes passed from friend to friend, straight through to its viral explosion on YouTube, there had to be something more to it than some pissed-off guy ‘cussing up a storm.

The humor and pathos comes from Jack Rebney’s genuine frustration given the situation he was in. A hot, sticky, fly-infested two-weeks of shooting an industrial film without benefit of a teleprompter. This was real. This was something with which nearly every viewer could find a connection. We’ve all had “one of those days.” Jack Rebney had two weeks worth with a camera rolling. And yet, in between the swearing, which one could hardly blame him for, is an almost unexpected eloquence. Phrases like “do me a kindness,” “it doesn’t make any difference to me at this juncture,” and of course (French pronunciation, please) “Accoutrement! What the fuck is that shit?”, have been referenced in pop-culture all due to Jack Rebney.

Having been on shoots under less than ideal conditions, and having seen bad days and mishaps from both sides of the camera, I can appreciate where Jack was coming from. And for that reason, I always felt a personal connection to Jack’s plight. In recent years I’d show it on my iPhone to anyone who would watch. But for me, it ended there. I’d watch it or show it to other people who hadn’t seen it whenever the mood struck or there was a need for a good laugh.

I sometimes thought to myself, “am I watching this thing way too much?”, but that never seemed to stop me from watching it again. And then to my delight, I learned of Ben Steinbauer’s documentary, Winnebago Man

. I felt vindicated. I had admired and analyzed the video from afar. But Ben Steinbauer felt compelled to get behind the story, the rumors, the myth, and the legend of the Winnebago Man. And he’d done it! The result is an excellent film which is often hilarious, but there are so many layers to it. It’s part an examination of the phenomenon of unintended celebrity. It’s a quest film—as we are taken on the journey along with Steinbauer as he sets out to find Jack Rebney. And without revealing too much, it becomes a real human story. Dare I say, it’s actually quite touching. The human side of Jack Rebney is revealed and in it you may see your father, your grandfather, that elderly neighbor next door that tells great stories but you know not to get him started, and some of us may even see ourselves. 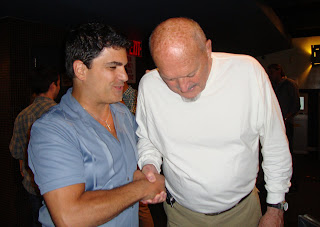 I saw the film in what I would consider the optimum conditions as Jack Rebney was in attendance. So there was this whole meta-cinematic vibe going on, since the film nearly concludes with Rebney meeting his “fans” and participating in a Q&A in a movie theater. So here right after the film ended was Jack Rebney meeting the audience and doing the Q&A thing. As for Ben Steinbauer’s journey being such a big part of the film, it totally works. It reminded me in many ways of my own experiences in tracking down and interviewing figures from old Hollywood. I only wish now that I had documented my interviews on video as well.

So, do yourself a kindness...if Winnebago Man

comes to your town, by all means go see it. And I owe thanks to my friend, Michele, who first exposed me to Jack Rebney all those years ago.
Posted by stevenderosa at 5:47 PM No comments: 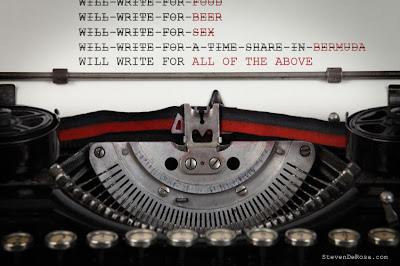 What can I say? I’ve been feeling pretty inspired lately, and so I’ve been doing a great deal of writing. Which is good. And it seems the more writing I do, the more I think about writing. And of course I’m thinking about all kinds of writing. Screenwriting, naturally. Writing about screenwriting. Writing about film. Non-fiction, novels, plays, essays, my next blog post, podcast, status update on Facebook or whatever.

So naturally, the question comes up. Why? Fuck if I know. It’s just something I have to do, I suppose. Fortunately, I get to make money doing it. But if I didn’t, would I still do it? Probably. Goodness knows I certainly went a long time doing it before I got paid to do it. And goodness knows I’ve been paid to write all kinds of things I would never tell you about here. And there are some things I would deny having written if you were to ask me directly!

Years ago, whenever I would meet my agent for lunch or dinner or drinks, he’d always stop me as I reached for the check. “Talent never pays,” he’d say. Many times I pointed out the double-edged meaning in his little catchphrase whenever a project of mine got passed on by an editor or production co.

During what I sometimes like to call my apprenticeship with screenwriter John Michael Hayes, I came to learn what the writer’s way of life is or at least can be. “It’s a precarious way of life,” he told me. “Because there's no tenure, there's nothing. You can be successful today and a flop tomorrow. And lots of producers, screenwriters, and novelists have demonstrated that. Nobody knows why. Fads change, your talent changes, and sometimes your luck changes. Luck is a part of it. But to be a writer it's not something you do on the side. It's a way of life.”

So with my latest baby out in the world, waiting to be accepted or rejected, or more than likely sent back to be altered to fit someone else’s idea of what it should be, I’ll sit back and observe, go about my daily routines, see people, visit friends, engage with loved ones, and every now and then you’ll see me drifting off somewhere.

As I always say, just because you don’t hear me typing, it doesn’t mean I’m not writing.
Posted by stevenderosa at 8:40 PM No comments:

Promote Your Page Too